How Can Industrial Demolition Help the Economy? 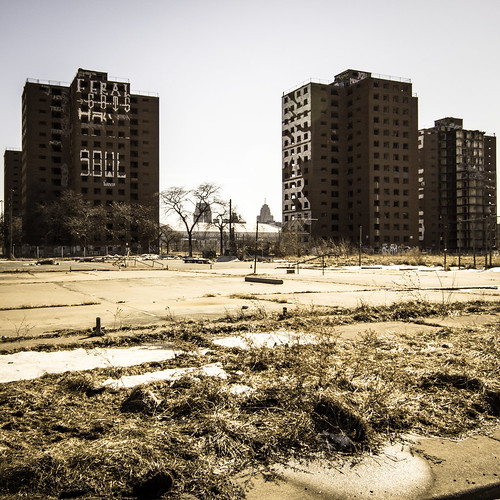 In the first decade of the 21st century, the number of vacant housing units in the U.S. increased by 44%. Abandoned commercial and industrial structures also proliferated, especially in the country’s former manufacturing centers, such as Cleveland, Pittsburg, and Detroit. As American manufacturing declined, jobs in these cities dried up. In the Recession and housing crisis, property owners in many Midwestern burghs found themselves “underwater” on their mortgages, and unable to make payments. Now, Rust Belt cities face a major problem: How to deal with abandoned structures, which magnetize crime while driving down property values. As of 2013, there were 60,000 abandoned homes in Detroit, and 20,000 in Cleveland.

While an abandoned property remains standing, it draws criminals. Instead of housing families, these gutted structures are used for prostitution, drug use, assault, and theft. The longer a building stays abandoned, the more likely criminals will strip it of copper, piping—anything of scrap value. Moreover, abandoned buildings pose safety hazards to neighborhood children. Remaining neighbors soon flee—a phenomenon dubbed “Blight Flight”—and the area continues to sink into decrepitude.

Commercial and industrial demolition is an option that many Rust Belt city officials advocate to freeze blight. The Brookings Institute and others have found that demolition is necessary for several reasons:

—Housing supply exceeds demand. One Harvard study suggested that some abandoned homes may be renovated for about $10,000—the average cost of demolition. However, this approach does not make sense when one considers population patterns. Economic weakness in these cities makes it unlikely that their populations will increase rapidly; if growth does occur it will not come quickly enough to fill refurbished houses.

—Young families want newer home styles. A community redevelopment group in Cleveland renovated 50 abandoned homes at $180,000 each. The homes were sold for just $90,000—a loss of 50% for developers. Homebuyers refused to pay higher price tags for outdated structures. To revive these cities, planners must create vibrant, attractive communities with desirable home plans. Older structures are not in line with what younger Americans look for in a home. In many cases, it is better to start fresh with a blank lot, where developers can create a home that appeals to modern buyers.

—Demolition can deliver appealing green spaces. Frank Ford, a planner who worked on the Cleveland renovation project, now says that demolition is the best route. According to Ford, it’s best to tear down older structures and turn the land into green space. “There’s a direct relationship,” Ford told CNN, “If there are two bad houses on a block, people will move away and their houses go vacant. Take them down and people will stay.”

—Vacant buildings are costly to maintain. An analysis from Econsult Corporation found that the city of Philadelphia paid $20 million annually to maintain abandoned structures. Vacant lots with no structures are far less costly to maintain. They do not attract as much criminal activity, and neighbors can more easily pitch in on maintenance. Indeed, Cleveland has given some abandoned lots to neighbors for transformation into green spaces. Once ramshackle buildings are demolished, the vacant lots may be turned into community gardens, used for storm water management, or repurposed into play areas, adding value to the neighborhood and magnetizing young families.

Cities across the Midwest recognize that demolition can improve their economies by clearing away blight. Many are using federal dollars to demolish eyesore structures. In 2010, the Treasury Department set up the Hardest Hit Fund. Originally, this fund was intended to stave off foreclosures. However, many municipalities are using the Hardest Hit Funds to remove abandoned structures. Michigan, for instance, is using $175 million in Hardest Hit Funds to demolish homes in Flint, Detroit, Grand Rapids, and 13 other cities. Detroit has more than 80,000 abandoned buildings; there, 250 houses are being demolished each week.

Revitalization can follow demolition. Some of Cleveland’s cleared lots are seeing new life as orchards. One entrepreneur there, Mansfield Frazier, has even planted a vineyard on a .75-acre lot where an apartment complex once stood. The bank that owned the property promised Mr. Frazier the land if he could make the vineyard successful in five years; he has done so in just three.

As Portland demolition contractors, we recognize that home demolition has a far different flavor in the Rose City. Here, Portland industrial demolition may upset neighbors, who would rather see grand old homes be revived rather than torn down. However, in Rust Belt cities where housing demand is low, it’s clear that demolition can “wipe the slate clean,” offering a fresh start for neighborhoods. Cities that invest funds in the demolition of abandoned buildings can see significant economic benefits.