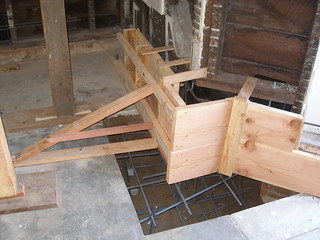 As Portlanders have known for some time, the Pacific Northwest is overdue for a major earthquake. Portland sits on three fault lines, all of which could quake at any time. Moreover, the Juan de Fuca tectonic plate, located off the Pacific Coast, is due for a major shift. The last time the Juan de Fuca plate’s subduction under the North American plate caused a megathrust earthquake in the Pacific Northwest was in 1700. Based on carbon dating from tsunami deposits, experts estimate that earthquake to have been 8.7 to 9.2 on the Richter scale—about as powerful as the devastating 2011 quake in Japan. Scientists say a similarly quake could hit the Pacific Northwest at any time. Are Portland’s buildings ready?

According to University of Portland Environmental Studies professor Robert Butler and many other experts, no. Prior to 1990, buildings were not constructed to meet earthquake standards. So any edifice that hasn’t been retrofitted for seismic activity is likely to fail when “The Big One” hits. As Portland industrial demolition experts, we can tell you that many of Portland’s buildings would collapse in an earthquake. Older homes in Stumptown feature basements and elevated foundations. In an earthquake, an unsecured building could slip off its foundation. Earthquake retrofitting firms can help by bolting in universal foundation plates, which serve to hold the structure on the foundation when a quake strikes.

Retrofitting for earthquakes is primarily limited to bridges and private homes at this point. Over the next year, ODOT is retrofitting five Portland bridges. Local earthquake retrofitting firms are busy handling residents’ demands for upgraded foundations; however, overall, only about 20% of Portland homes are covered by earthquake insurance, which typically requires retrofitting work. What’s worse, the City has no seismic standards for retrofits, meaning that even when retrofitting work has been done there is no state oversight of the quality of work. California and Washington state have permitting processes for seismic upgrades, which provide some degree of verification that quality work has been done.

Self-motivated building owners can complete retrofitting work themselves using residential seismic strengthening guidelines provided by The City of Portland’s Development Services. However, not every homeowner will have the financial resources to carry out these suggestions. California has addressed this problem by providing $20 million in retrofitting grants for homeowners through the California Earthquake Authority. Oregon has no such funds available for property owners.

City of Portland Commissioner Steve Novick has been a proponent of retrofitting requirements for the weakest buildings in Portland, namely those composed of unreinforced masonry (URM), i.e. brick and stone with no supporting rebar. There are URM businesses, schools, churches, and apartment buildings in Portland—about 1,700 buildings in total. Beyond their tendency to collapse in earthquakes, URMs are dangerous because they will send bricks and masonry tumbling to the ground when a quake hits. Novick’s proposal is to have URM building owners pay into a communal pool that would go toward retrofitting the most dangerous buildings first.

Some Portland commercial building owners are retrofitting voluntarily, at the cost of $25 to $27 per square foot. Walter McMonies, owner of a 36-unit apartment building in Nob Hill, upgraded his structure at a cost of $480,000. But the majority of commercial property owners are avoiding earthquake upgrades by shunning renovations. The City’s code requires seismic upgrades only when an owner makes other renovations.

As Portland demolition leaders, we shudder to imagine our fair city after a magnitude 8.0 or 9.0 quake. It appears Portland is ill prepared to survive such shaking. Our buildings are liable to crumble, decimating Portland as we know it. If The Big One does strike, you can be sure we’ll be on hand, cleaning up the damage.

[photo by: John Mills on Flickr via CC License]