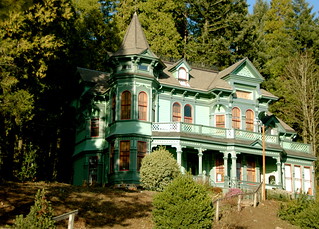 As Portland grows, the city is looking for ways to accommodate new residents within the urban growth boundary. It’s estimated that 700,000 people will move to Portland within the next 20 years. Apartment complexes are being built across the Rose City to house newcomers. The growth is also spurring building demolition. Portland officially saw 273 demolitions in 2014. Some demolition and renovation projects have angered current residents who wish to preserve the historic, unique homes in their neighborhoods. In this blog we take a look at the issue of historic home demolition, with any eye toward how the debate affects Portland demolition contractors. We will take a look at recent developments in this ongoing discussion and suggest a balanced approach that pairs environmentally friendly demolition with optimal asset recovery.

Development Woes: Sprawl vs. Density. There’s no getting around it: urban growth requires demolition. Since 2008 when our economy stalled, home sales have picked up. Portland’s popularity means there are fewer homes on the market, so developers must look to run-down or underused lots to raze and rebuild. In some cases, developers have gone further, demolishing historical buildings by skirting codes and utilizing loopholes.

The current situation is also a result of the city’s long-term plan to emphasize density over sprawl. This approach has been in place for some time now. Because Portland has tried to limit sprawl at the edge of its boundaries, new development is occurring in more populated, central areas. This is in contrast with other burghs, where lack of growth boundaries means developers can create entire subdivisions of new homes farther away from the city center. The Urban Growth Boundary is the city’s main tool for limiting sprawl.

The Great Portland Demolition Debate. The debate has pitted Preservationists against Property Right Advocates. The Preservationists hope to maintain Portland’s unique neighborhoods, while Property Right Advocates say they should be able to use their properties as they please. To complicate things, the City has rules and regulations that developers are sometimes able to work around. Some maintain that the cities regulations and zoning requirements are tough enough, and that developers who work and abide within these rules are playing fair. Others claim that as developers dodge rules, the quality of the city will decline as historic buildings are replaced with modern structures.

As a case study, consider the story of Kevin Rose, a Google Ventures partner who purchased an 1892 home in Northwest Portland. He and his wife initially planned to demolish the entire structure and replace it with a modern structure inspired by the Legend of Zelda video game. Nearby residents rallied together to stop the demolition: they pleaded with the Roses to stop demolition; they got more than 3,000 signatures on a Change.org petition delineating their stance; they even found a buyer to purchase the home from the Roses at a price higher than their initial investment of $1.3 million. The Roses did eventually accept the offer, and the home is slated for restoration. However, not all demolition tales in the Portland area have ended so amicably.

The Balanced Approach. Here at Elder Demolition, we’ve been listening to both sides of the argument, and have found valid points in each camp. We also recognize that a balanced approach is needed. Here are some points we would like to drive home.

Ultimately, development happens, and demolitions and will continue to happen as our fair city grows. The Portland population is expected to grow to 3.8 million inhabitants by the year 2060. Those who decry the growth should remember that demolition firms such as Elder Demolition are best equipped with the knowledge and tools to do the job safely with an eye towards green practices and asset recovery.